n 25 BC, Rome, Rome decided to undertake a campaign for the
conquest and colonization of Asturias, in the northeastern
part of the Iberian Peninsula. Although the official excuse
for this intervention by the Roman army was to protect the
peoples to the south of this region from frequent attacks
by the Asturs, contemporary historians agree that the main
reason for the Roman army’s intervention was the presence
of large gold reserves in the region. After the conquest – the
campaign having lasted with various interruptions until the
beginning of the first century AD – Rome formed a policy
for industrial gold exploitation. A massive, complex system
of hydraulic engineering (alongside roads) would be created,
bringing about growth in many local settlements.
In 77 AD, the historian Pliny the Elder (Natural History 33,
21), who served as procurator in Hispania, recorded one
of the various mining techniques used in the mountains.
Employing the ruina montium mining practice, miners
dug extensive water channels sourced from natural water
reserves or artificial damming. These channels formed tunnels
entering the hill to be mined, and when torrents of water
were released the hydraulic pressure broke up huge chunks
of earth and rock. The gold was extracted when the material
was later washed in streams. This engineering practice was
also employed in defensive systems in many of the Asturian
hillforts in the far western area. Initially dug by hand into
earth and rock, the ditches surrounding these sites were
widened by the diversion of nearby streams towards them
through a series of gullies, thus creating sustained water
erosion to aid in the enlarging of these features.
The account written by Pliny, the immensity of some mining
sites which clearly belong to the Asturian Roman period,
and the questionable academic premise that all complex or
large-scale undertakings must be the result of Mediterranean
influence, are all factors which have led to the current belief
that ancient mining was only carried out by the Romans. This
traditional view has been maintained in the academic world
because there has not been any archaeological exploration of
the hundreds of documented mining tunnels in the Asturian
mountains. A study in 2012 of several clear examples of
Iron Age Asturian hillforts with defensive systems excavated
using the ruina montium technique leads us to question
the traditional attribution of this engineering technique to
the Roman period. From the time of the Early Iron Age,
the defensive systems at Asturian hillforts demonstrate that
superior engineering techniques were used, as seen in our
excavations at Cogollina in 2004 (see Origini. Preistoria e
Protoistoria delle Civiltá Antiche 33, 2011), where ditches
of over 50m in length and varying depth were dug into the
rock, modular wall systems were installed, and rainwater
was diverted away from residential areas. 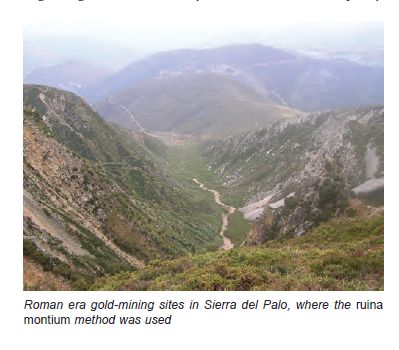 Although in this outstanding example no mining system
was used for excavation, at another Asturian site, the
hillfort at Ceruñales in Noceda (clearly of Iron Age origin),
there existed a network of gullies through which water was
diverted towards the area where the ditches were dug using
the ruina montium practice. We have recently carried out
a study at the Ceruñales hill fort, located in proximity to
the major gold mines in Hispania, and around which a
great quantity of remains of hydraulic works can be seen.
Hydraulic practices were not only employed in exposing
small gold sluicing surfaces, but also in excavating defensive
systems for the settlement. In the course of investigations
carried out by Alvarez González (published in Complutum 4,
1993), archaeological researchers found several pieces of hand
made pottery, as well as part of a cabin. Although no Roman
artefacts were found, except for some local ceramic pieces, the
presence of a trench excavated using ruina montium mining
techniques led them to associate the hillfort, erroneously
in our opinion, with the Roman period, according to the
traditionally-accepted cultural premise.

techniques at the Asturian hillfort in San Martín del Valledor . The
large number of hillforts using this kind of defensive system and
the re-dating of the Ceruñales hillfort leads us to suggest that the
Asturs where using these techniques before THE ARRIVAL
OF THE ROMANS
In our view, the great defensive engineering works at hillforts
where activity has been clearly dated to the latter part of the
Early Iron Age, as in the case of material at the Ceruñales
hillfort, demonstrate that the mining technique known as
ruina montium was already practised before the arrival of the
Romans, although it reached its maximum potential with the
help of professional engineers from their army. Despite the
fact that the sites are undated, the large number of hillforts
using the technique supports our theory bearing in mind that
the Roman presence brought about a decline in the number
of fortified settlements. Archaeological findings once again
demonstrate the advanced stage of development of an Iron
Age people of the Atlantic region, the Astures, despite the
traditional view of ‘savagery’ firstly held by Roman historians
and subsequently until the present time by a large proportion
of the recognized academic world.
Alfonso Fanjul Peraza