Asturian legend: the combat of bulls in Yernes y Tameza.

In the coat of arms of the council of Yernes and Tameza there are two bulls, one red and one white. This is the legend.

In the coat of arms of the council of Yernes and Tameza there are two bulls, one red and one white. This is the legend.

It was said that the people of Proaza had to pay to take advantage of the pastures of Veiga de Cuallagar, owned by the Tamezana people, but instead of paying, they fought against them. After many discussions they came to a solution, to face two bulls in combat and, where one of them was victorious, to mark the limit of pastures. The inhabitants of Proaza carried a huge bull, “Ratín” (that in the coat of arms appears painted white). The inhabitants of Yernes wanted to take one of Ramón de La Casona, also very large, but advised by a servant of the house decided to take another smaller but very strong that was “roxu villanu” (in the shield appears painted red).

The combat began in the Veiga de Cuallagar, specifically in Fonte Cimera, where they were entangled by the horns and the “Roxu” was pushing the white to the Cantu la Flecha, where he knocked down the other bull by land (there is a black stone marking the limit).

In Ireland we find a very similar legend, which goes back to ancient times, perhaps to the Late Bronze Age or the Iron Age. In Cuchulainn of Muirthemne saga, popular hero of Ulster, also decide a fight bulls to solve the problems of pasture with men Munster and Connaught. They face the Astiblanco of Cruachan Ai, owned by Queen Maeve with a red bull (on the recommendation of a servant who took care of the pigs): the red bull of Cuailgne. The latter defeats the white bull and where the flanks of the horns of the red of Cuailgne fall the border is marked, giving name to the place.

Returning to Asturias, we find again the bull fighting in the council of Amieva, in the Port Toneyu. The contestants, in this case, are the Virgin of Cuadonga and the Virgin of Saubu. When the bull of the first was winning in the battle, the Virgin of the Saubu replied: “Trábate, mi güé” and, stabbing its feet in the earth, it was impossible to knock it down. The bull won and the footprints were marked on the place.

Bullfighting continues to be a popular attraction at festivals and fairs in Miranda (Portugal), a cultural, historical and linguistic area very closely linked to Asturies. 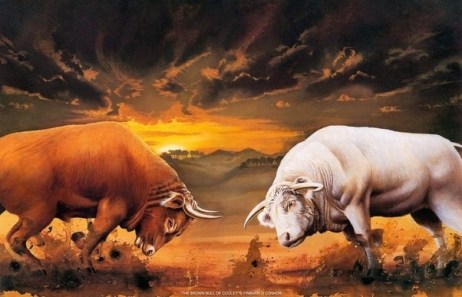 n Porrúa (Llanes – Asturies) it is said that, in order to mark the border of pastures in the Cuera with the people of Cabrales, they released an ox and the inhabitants of Cabrales a mule. Where they crossed, the mule’s foot was marked, the place called Mon Mular, near Tornallás, marking the stone with a cross and delimiting the pastures of both.

There is another legend in Amieva, in the port, in the place known as La Batuda, where it is said that they litigated the Virgin of the Saubu and, in this version, the Víergen of the Pontoon. Again, a bull fight serves to resolve the conflict. When the ox of the Virgin of the Saubu was about to lose, she shouted, “Cagüen Dios, clávate mi güé!”, And the ox grabbed its feet to the ground and defeat the other bull, leaving their marked hooves on the ground. It is also added that in the rock were also three marks made by the “tarucos” of the wooden clogs that was wearing the Virgin.

1st.- Coat of arms of Yernes and Tameza council, Asturies.